Welcome, friends, to the home of Art by Arny Weinstein. Please browse the sculpture gallery and more, and I look forward to hearing your thoughts and inquiries. Current commentary follows below. 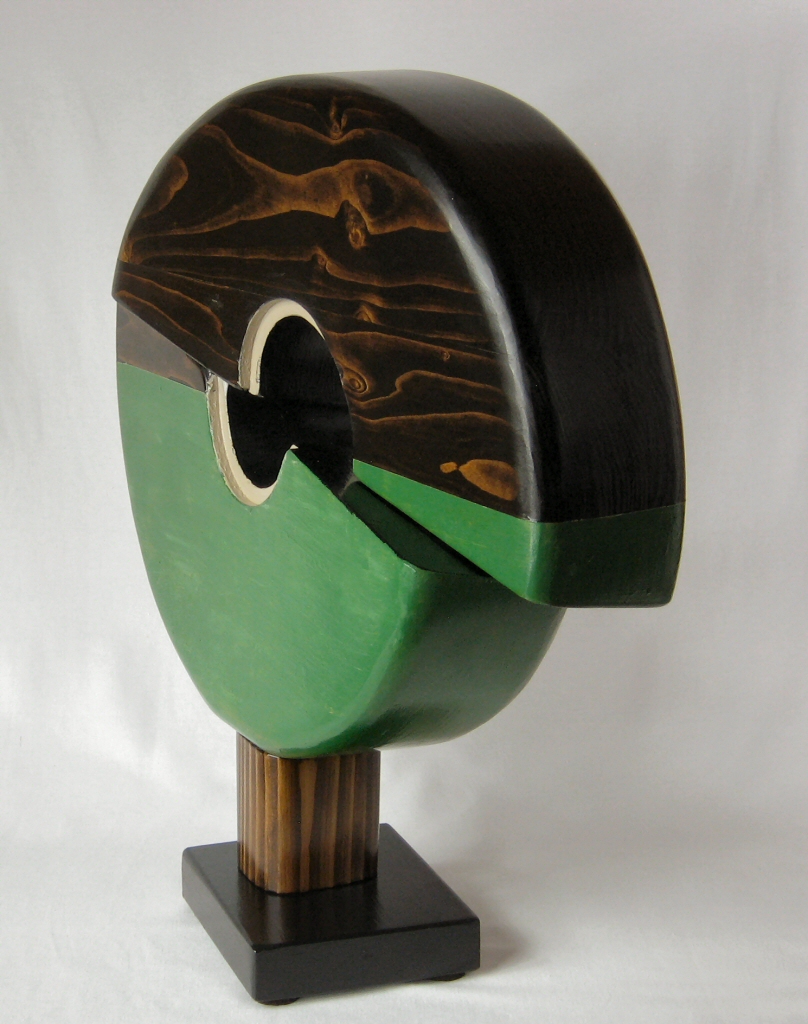 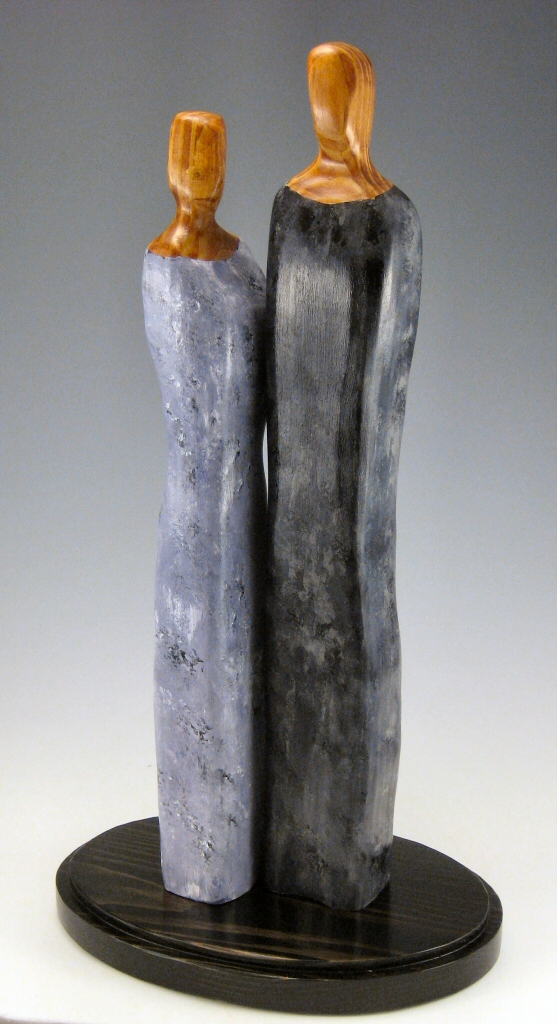 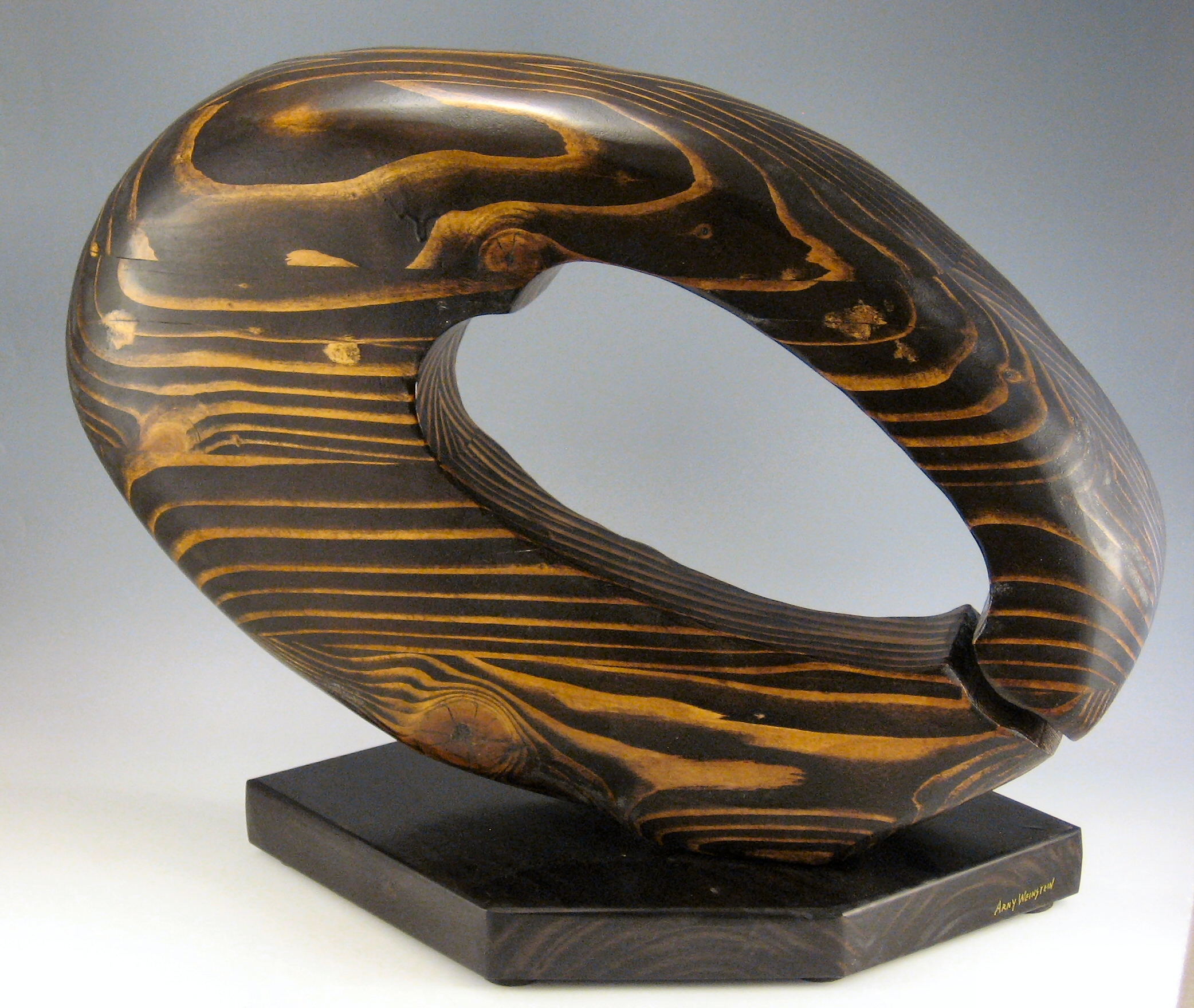 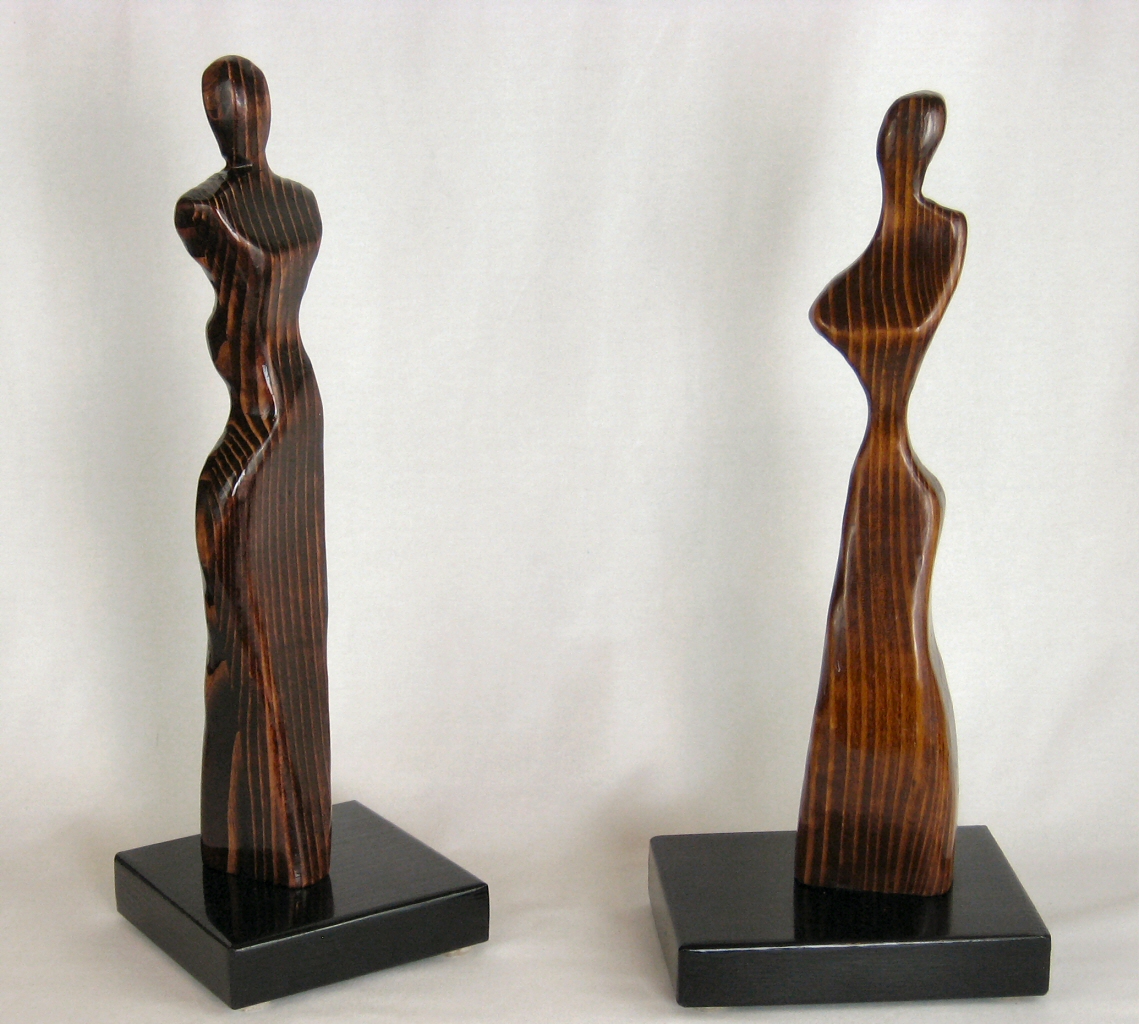 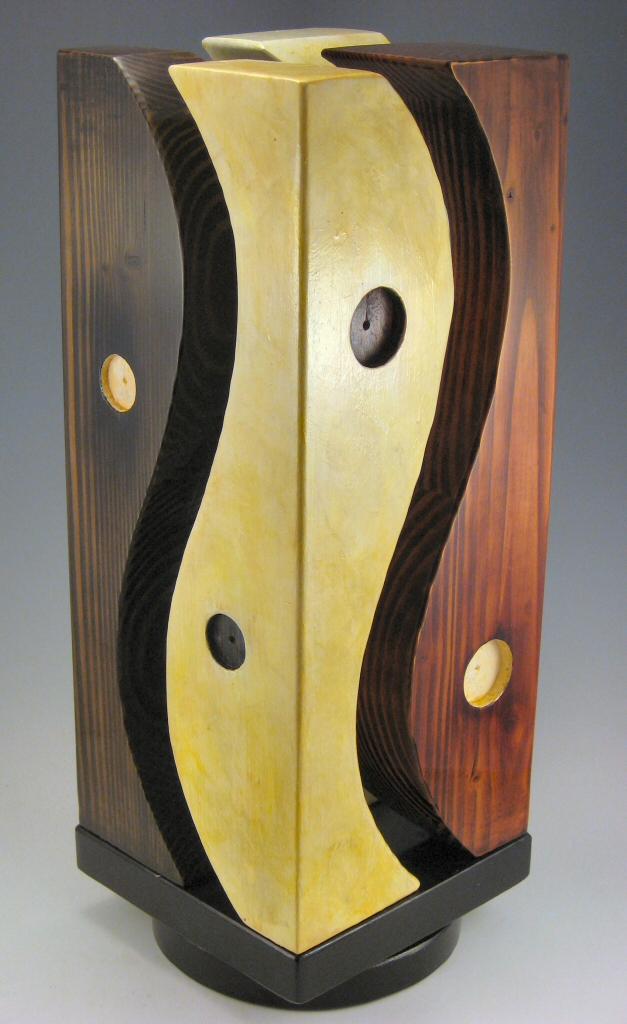 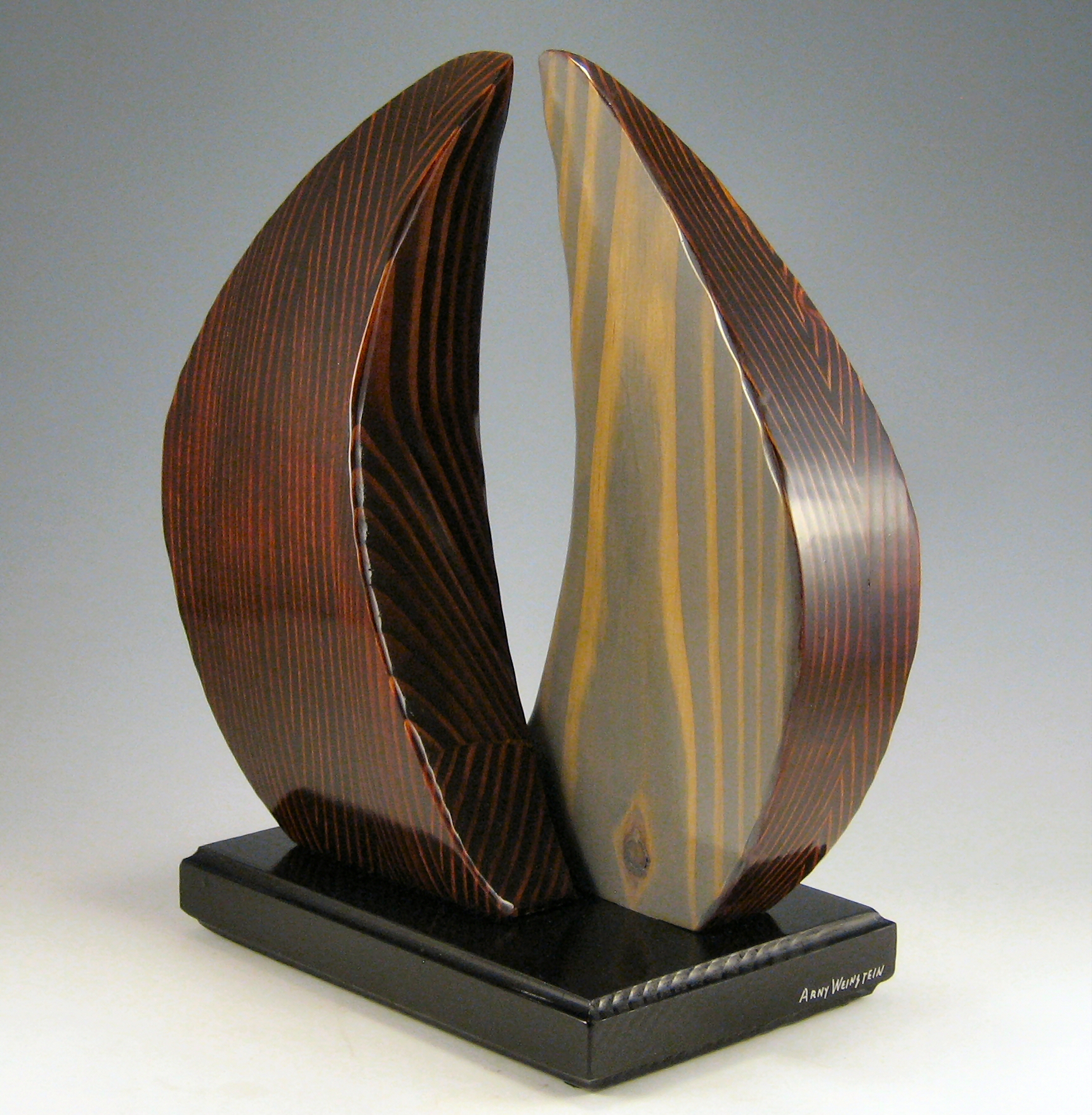 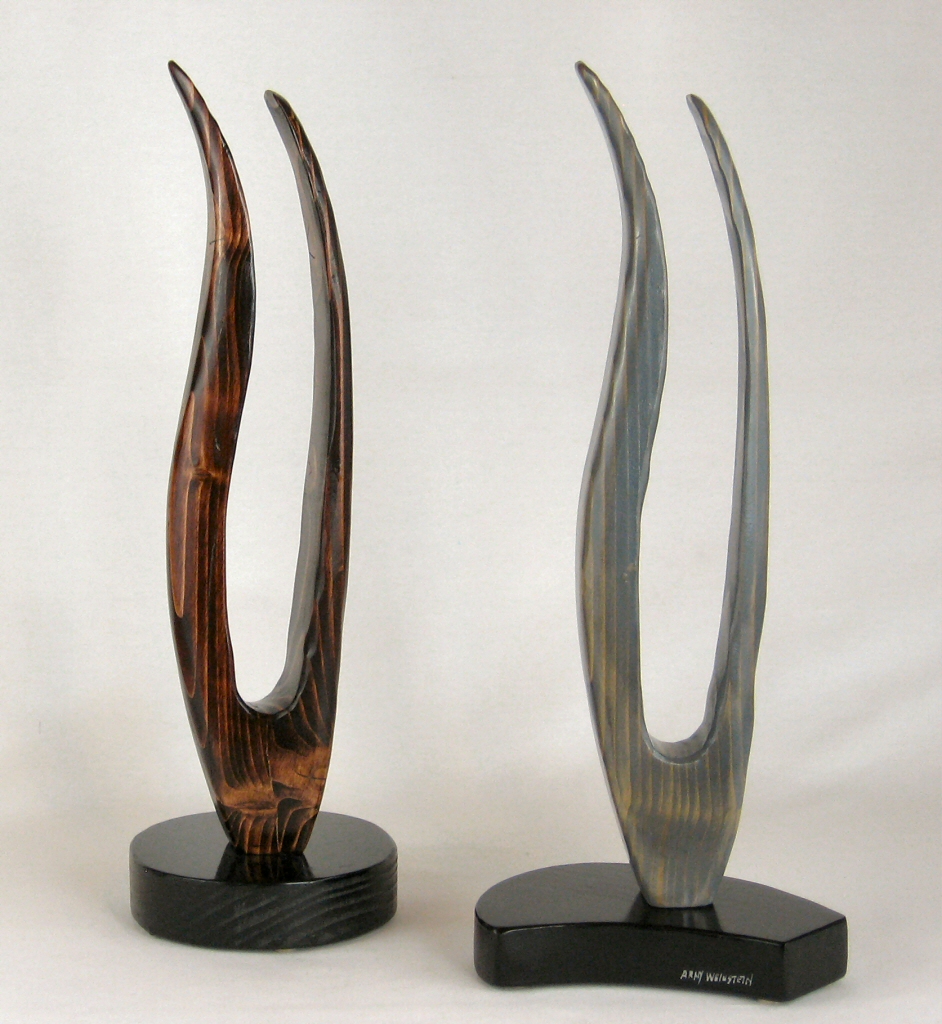 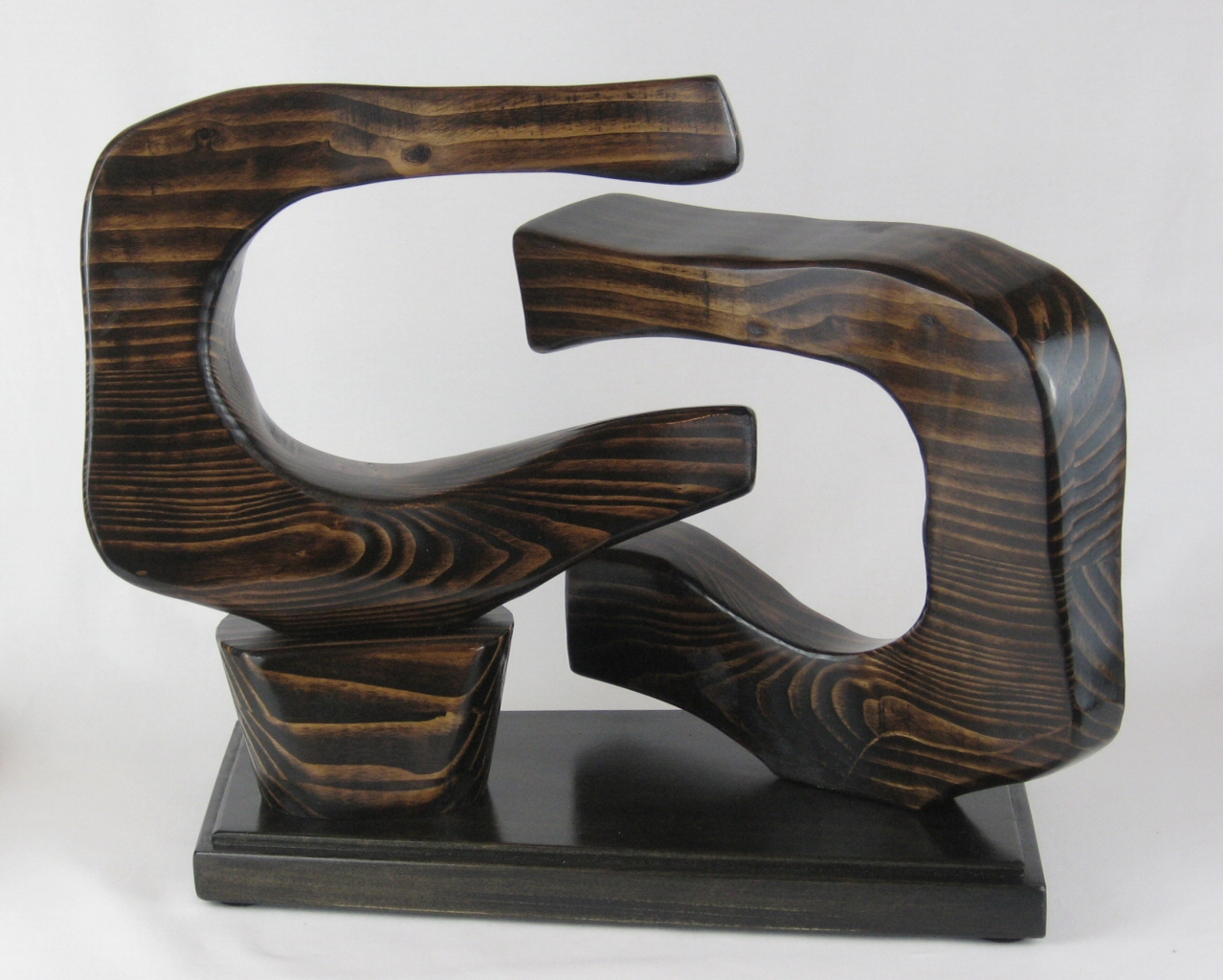 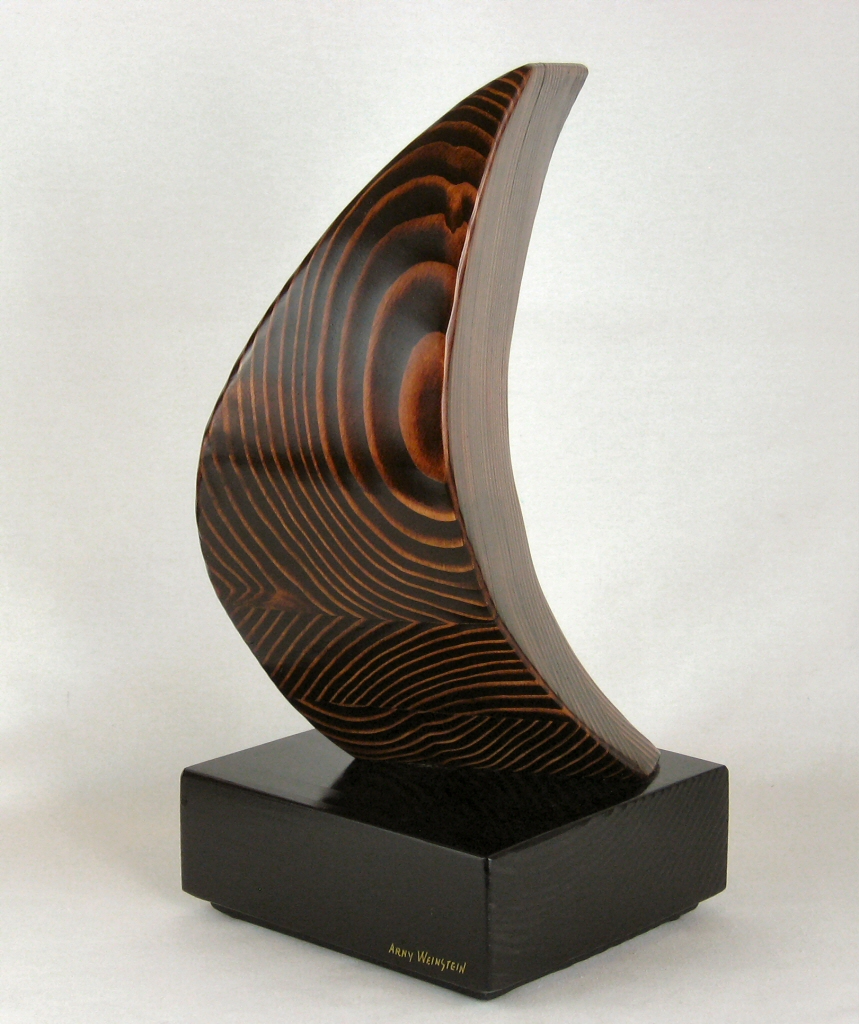 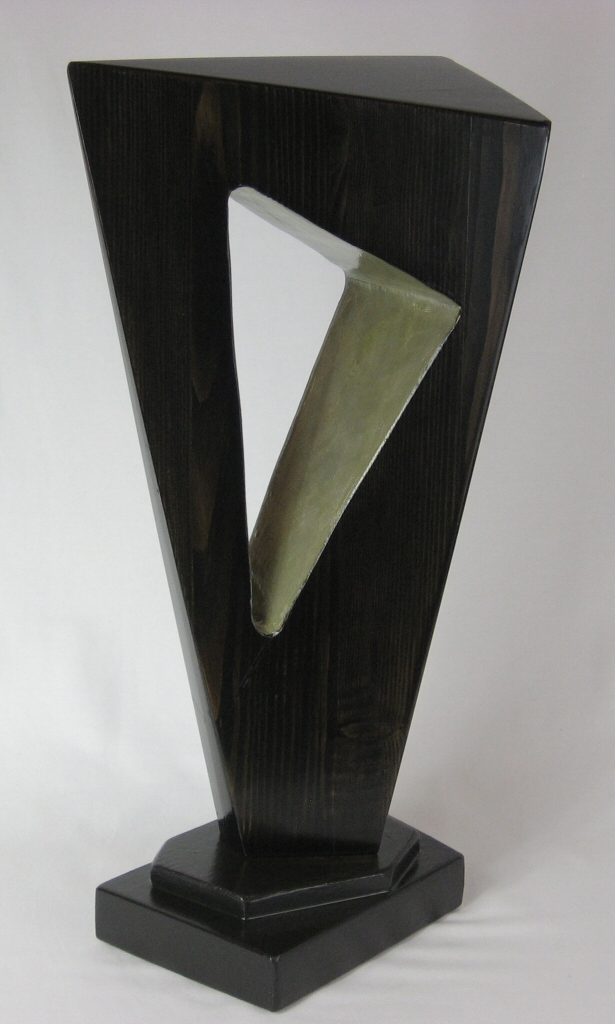 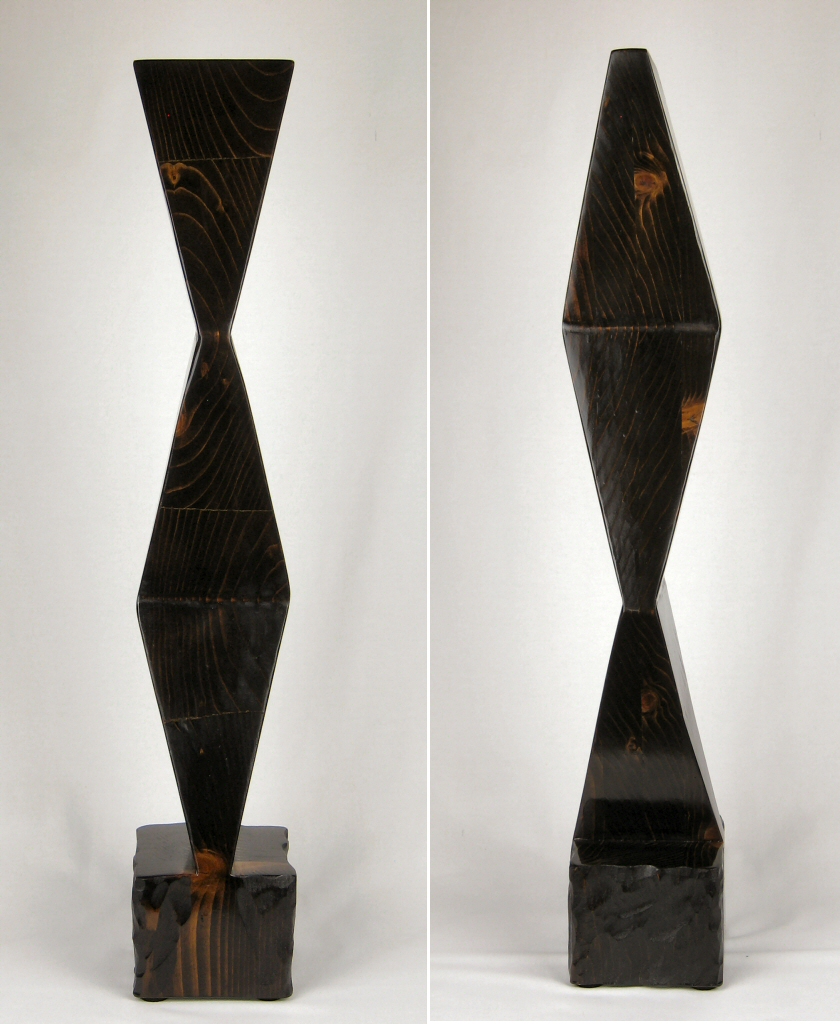 Each “tier” in these sculptures is composed of four isosceles trapezoids. But one of the parallel sides is quite short so they more closely resemble triangles, alternating between pointing up and on a plane tilting down, and pointing down on a plane tilting up. This results with each tier top and bottom turned 90 degrees from each other. Each trapezoid height to width (at the widest base) is the Golden ratio, approximately 1.618.

This basic form evolved a while back from a kaleidoscope named “Take the 5:15”. I had always found this form quite satisfying and hoped to explore it further at some point. So in effect, this scope was an early single tiered prototype for this series of work.

These sculptures can be multi-tiered, and become quite towerly (my word). Lately I’ve been enjoying the 3 level structure, and its differing character viewed from 3 angles . Also I have been working with acrylic paint and find this form conducive to a painted surface. See the Sculpture gallery for more.

View it at a 45° (seeing 2 sides) for another perspective of the form.  There are no twists in the curves, just a basic arc, but the resulting line across the top is perpendicular to that at the bottom.  Currently available in the Sculpture gallery, Concavex C1-1.

On an occasion back in my kaleidoscope making days, I was experimenting with my band-saw trying to come up with a satisfying new design for a hand-held scope. And I eventually came up with something that I thought was so cool, man. Thus the scope “Koool, Man”, and subsequent variations (which may be different wood, size or mirror system) were created. The form is an elongated (and tapering) square antiprism. It has eight triangular sides with a square top and bottom at a 45-degree angle to each other. So…

I live in the suburbs just north of New York City. One day I decided to take a ride down Manhattan’s West Side bike path. As I am pedaling downtown, the almost finished One World Trade Center Tower is getting closer and bigger. Then I realized, “Hey, this building is the same shape as my kaleidoscope!” And yes it is. Just a few weeks later at an Art Show, I saw a gentleman who purchased that scope earlier, and he said to me “Hey, did you see the new World Trade Center building, it’s the same as…”.  Cool, man. So…

I was inspired to create a  replica of the structure and cleverly named it “One WTC”. It has a scale of 500 : 1. The real thing is 1776 feet, so my building is about 42.6”. (The overall height is a bit more with the base it stands on.) The scale is accurate for the 200′ x 200’ footprint, when the lower square portion starts to taper for the octagon floors, the antenna mast, and the four entranceways.

A couple of appealing features regarding this form, is that from any angle, you can see 3 or 4 of the eight triangular sides, and every other side tapers and faces slightly up. This often results in daytime images of the building having adjacent glass facades being light/sunlit or dark/in the shadows. Accordingly “One WTC” has alternating lighter and darker sides. See it in the Sculpture gallery.

A little while back, I had the opportunity to design and create a relatively large commissioned statue. I took some photos during the process and have put together a slideshow. Please view “Making Emma” at the bottom of the Select Past Work page.

Explorations with wood has led to this collection of multiple-wood sculptures. All of the woods are solid hardwood pieces in their natural color (no veneers, stains, and no inlay). I resaw and thinly plane numerous wood strips, rip them to varying widths and glue to form a laminated block from which the work is formed.

Using primarily the band-saw and then drum sanding, parabolas and other shapes appear as layers are exposed by angled and curved cuts. The resulting patterns are somewhat orderly, somewhat abstract. Woods seemingly blend into each other, enhancing its organic feel. This process allows for very thin sections — sometimes translucent – yet with different solid wood designs on each side! IMHO, quite intriguing.